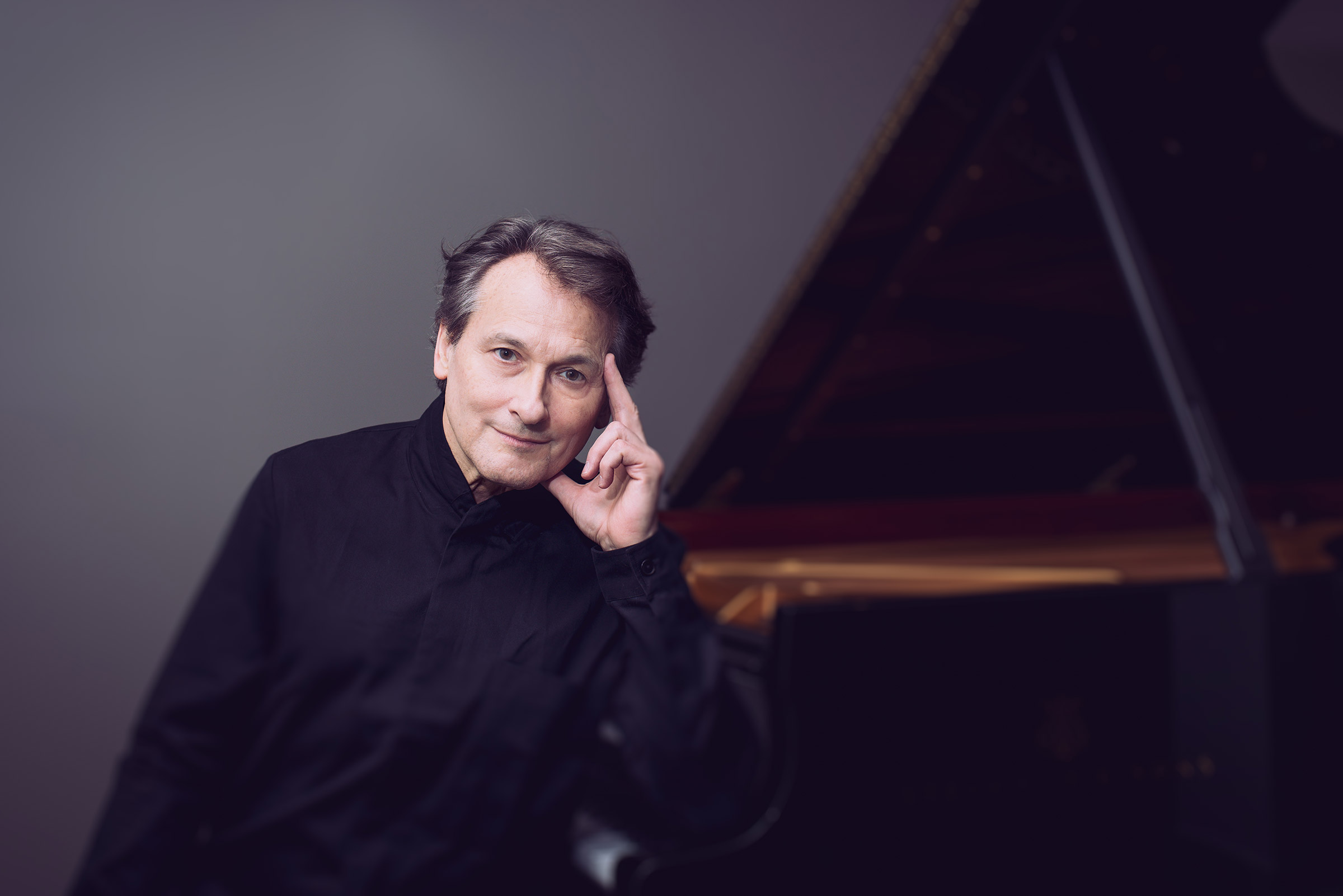 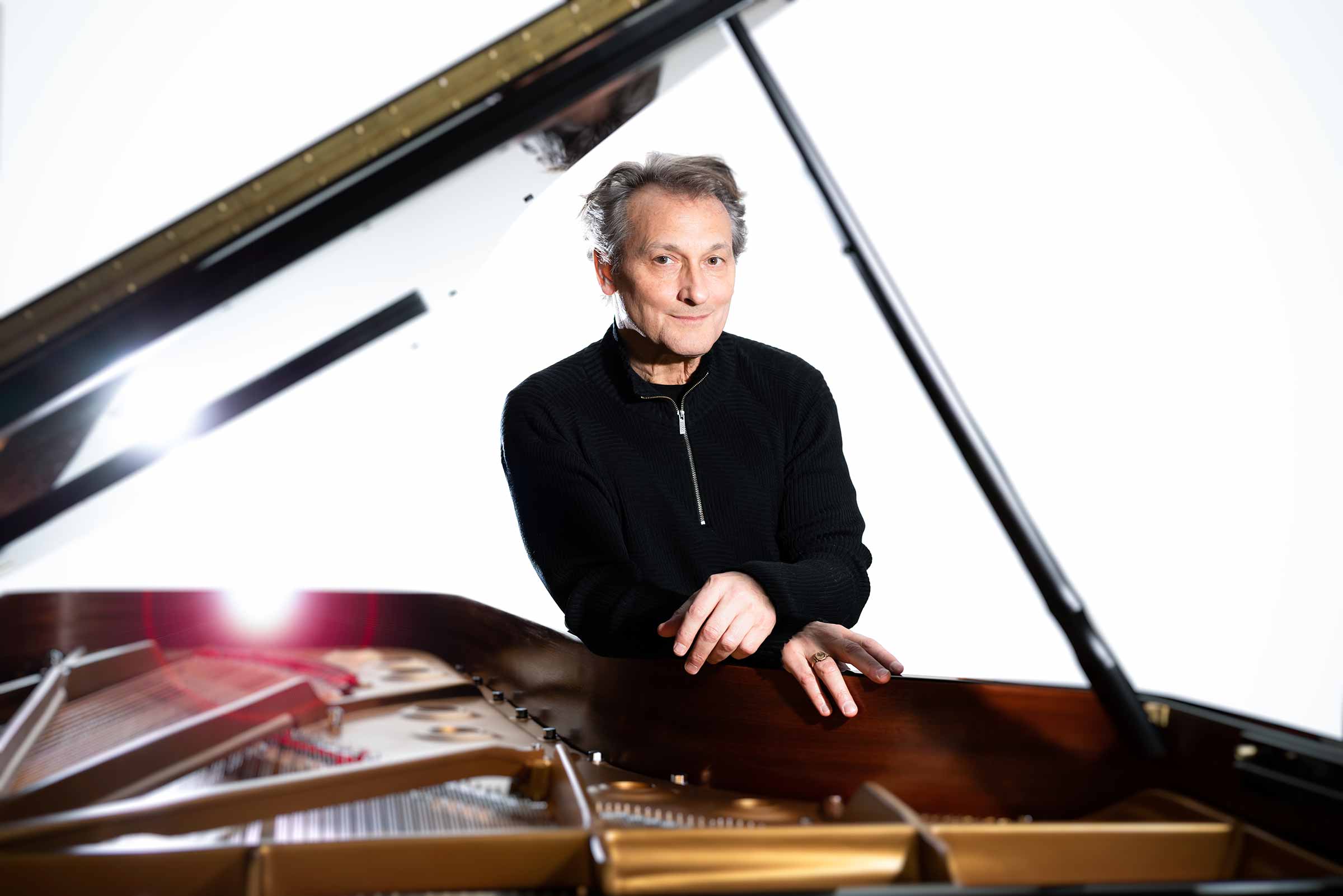 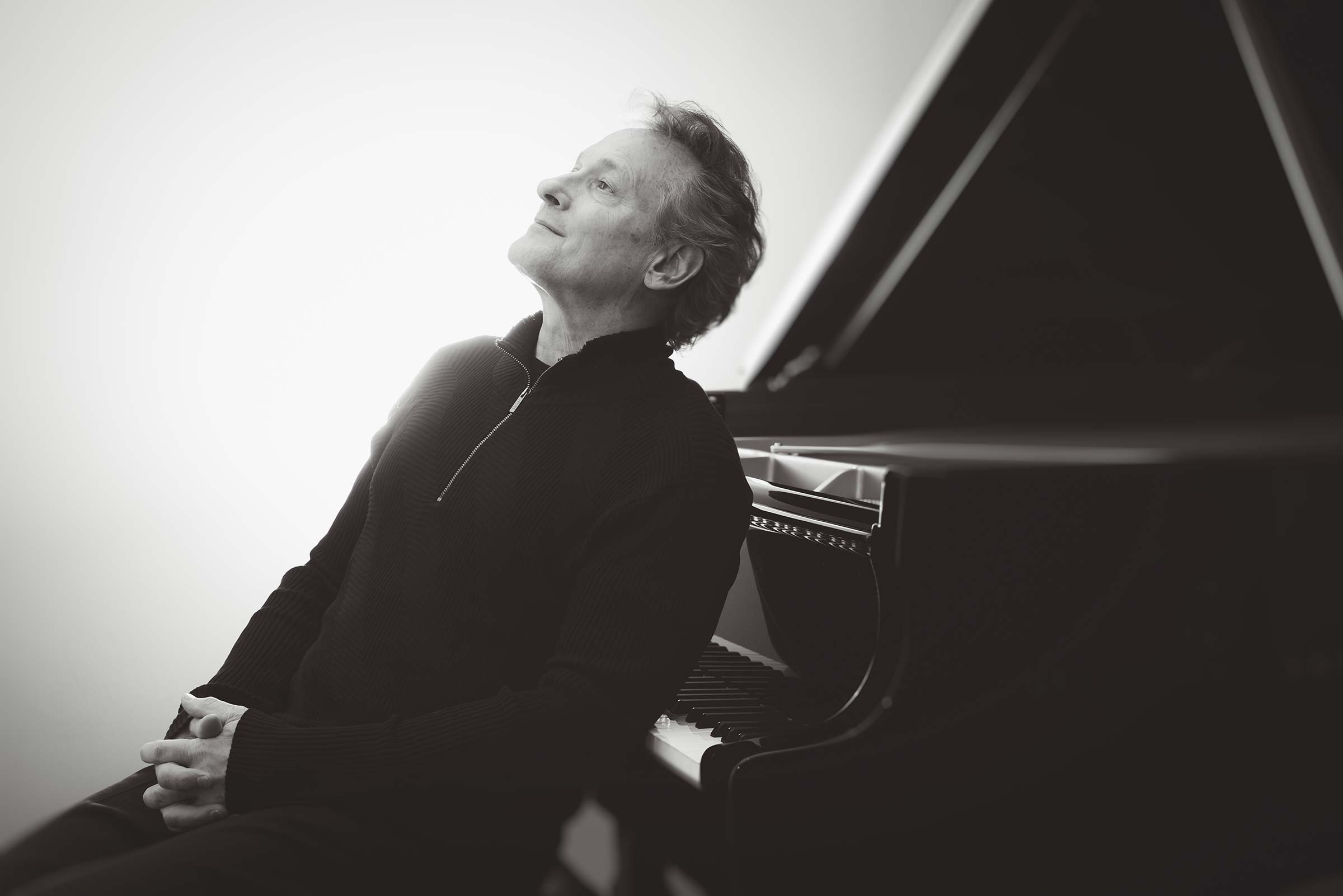 Pianist, arranger, collaborative artist, composer, educator and media personality; Christopher O’Riley follows his passions into a fractal array of innovative directions, ever striving for the truest and deepest human connection, through performance, collaboration, communion. Living by the Duke Ellington adage, “There are only two kinds of music in the world; good music and the other kind” O’Riley spotlights the greatness inherent in all great music, self-evident in his all-embracing genre-fluid range of projects.

It is with Mr. O’Riley’s dedication to empowering the learning abilities, the personalities and imaginations of artists, young and old, that he comes to his latest endeavor. As he shares performances of his home-recorded traversal of J.S. Bach ~ The Well-Tempered Clavier he has produced an online archive of video lectures, Everything We Need To Know About Playing The Piano We Learn From The Well-Tempered Clavier, a series illuminating a new perspective on each Prelude and Fugue, expanding on all the ways the paucity of Bach’s notation encourages us to engage creatively, imaginatively, engaging the inherent freedoms in all parameters of musical notation; instruction and insight to inspire transcendence and epiphany.

O’Riley’s breakthrough competition year in which he won prizes at the Cliburn, Leeds, Montreal, Busoni, Young Concert Artists, Affiliate Artists and an Avery Fisher Career Grant afforded him repeat appearances with virtually every major American orchestra: New York Philharmonic, Los Angeles Philharmonic, Philadelphia Orchestra, Chicago Symphony, San Francisco Symphony; the orchestras of Seattle, Atlanta, Minneapolis, Cincinnati and many more. He has also toured the U.S. with The Academy of St. Martin-in-the-Fields in works by Mozart and Liszt, with the Ulster Orchestra in works of Ravel and Tschaikovsky, and in the U.K. with Tschaikovsky and Prokofiev 2nd Concerto with the Moscow Philharmonic and Vasilly Sinaisky.

O’Riley’s early passion for jazz would soon find a new outlet in Classical chamber music performance: the need to be constantly awake and aware to one’s collaborators in a truly instinctive level, and how quickly one can make subtle and immediate calibrations to create a perfect sonic environment to allow one’s partners to soar.

Communicating and effectively empowering one’s colleagues continues to be a crusade. O’Riley’s chamber music mentor, Benjamin Zander, had the impassioned  ability to instill in his students the inspiration not only to play a piece well, but to play it better than it had ever been played. That boundless encouragement coupled with an improvisor’s sensitivity to one’s partners innately informed O’Riley’s work on NPR’s From the Top. He hosted the program, heard weekly over 250 stations with an average audience of 250,000, for 20 years. For two seasons, From the Top At Carnegie Hall ran on PBS, and the Second Season won two Emmy Awards.

It was with great pride that the program shone a light on the artistry and personalities of the next generation of musical artists. But the most important work was behind the scenes: as collaborator, O’Riley sought to pay forward that same inspiration Benjamin Zander embodied. As host and collaborator, O’Riley was partner and mentor to thousands, companion and friend to millions.

It was in reaction to From the Top’s strictly Classical constituency proscribing ‘one minute of jazz, and you’re Off’ , flying in the face of the program’s original intent,  to celebrate lots of different styles and genres, that O’Riley began making his arrangements of bands he was passionate about. He knew he’d transcended arguments of genre when listeners would write into the program, having heard him, a known Classical pianist perform the post-announced ‘Karma Police by Radiohead’ asking “Who is this Mr. Head and where can I find more of his beautiful music?” Genre distinction rendered blissfully ineffectual. An appearance by O’Riley on the NPR magazine-formatted Performance Today, in which he performed works by Rameau, Shostakovich and his own arrangements of Radiohead and Nick Drake was immediately linked to over 150 Radiohead-related websites worldwide. Soon after, Sony Classical produced the first full album of his own arrangements, the only Classical album to receive four stars in Rolling Stone magazine, True Love Waits, Christopher O’Riley Plays Radiohead. Enthusiasm and demand created by O’Riley’s  unique pianistic voice resulted in another Radiohead collection, hold me to this (World Village); a disc devoted to the work of songwriter, Elliott Smith, Home To Oblivion (World Village); one dedicated solely to the work of Nick Drake, Second Grace (World Village); yet another an amalgam of songs by The Smiths, Cocteau Twins, Tori Amos, Nirvana, Pink Floyd, Tears For Fears, Portishead and more Elliott Smith and Radiohead, Out of My Hands. (White Tie Records).

More genre-fluid projects resulted from his work with cellist, Matt Haimovitz. Their first project was an homage to the iPod: Shuffle.Play.Listen (Oxingale/Pentatone), a two-disc set, featured repertoire of Stravinsky, Piazzolla, Martinu, Janacek as well as arrangements of Radiohead, Cocteau Twins, Blonde Redhead, John McGlaughlin, and movements from recent Centenary-celebrant, Bernard Herrmann’s score to the Alfred Hitchcock film, Vertigo. A similarly genre-straddling, Russian oriented project, TROIKA posed established masterpieces for cello and piano by Prokofiev, Shostakovich and Rachmaninoff with arrangements of each, as well as of more contemporary Russian artists, Victor Tsoi and the protest band, Pussy Riot, and The Beatles’ anthemic Back In The U.S.S.R.

O’Riley’s work with Matt Haimovitz crossed disciplines as well as genres: 2015 saw the release of their Beethoven.Period (Pentatone), their traversal of the Sonatas and Variations recorded on Matt’s gut-strung cello and an original 1828 Broadwood, a maker whose sound found in Beethoven deep sympathy.

O’Riley’s recorded immersions into the work of Scriabin: Vers la flamme (Image Recordings, 2004) and Franz Liszt, O’Riley’s Liszt (Oxingale, 2013) were each borne of grand, cross-media collaborations. Vers la flamme was choreographer, Martha Clarke’s synthesis of short stories of Anton Chekhov and the piano music of Alexander Scriabin. The ambiguous harmonic equilibrium and interaction between the synesthetically-conceived piano music created a portal of possibilities pairing particular works with specific dramatic scenario. This Lincoln Center production toured to the American Dance Festival in Durham, NC, to the Kennedy Center, Jacob’s Pillow, and through Lincoln Center’s sponsorship, on Broadway at the Victory Theater.

The centerpiece of O’Riley’s Liszt is the arrangement of Berlioz’s Symphonie Fantastique, originally Franz Liszt’s premiere foray into orchestral transcription, variously and largely rearranged by O’Riley. In 1998, the MacArthur Grant recipient puppeteer, Basil Twist mounted an aquarium puppet-ballet set to Berlioz’s hallucinatory score. That show ran for two years. Basil was invited to bring his production to the Ravinia Festival outside Chicago. Ravinia’s director, Welz Kauffman, apprised Basil of the fact of Ravinia as being a forum for live performance, and so he suggested as an alternative to the recorded performance of of Ormandy and Philadelphia that O’Riley be asked to learn the Liszt version and perform it live with the company of backstage, wetsuited puppeteers. The production was reprised at the University of Maryland, College Park’s Clarice Smith’s PAC three years ago. Summer of 2018 saw the original conception returning to its birthplace, the HERE Arts Center in the West Village for an enthusiastically received run, of which Ben Brantley of the New York Times proclaimed: “Anyone seeking pure, thought-exorcising escapism — the kind provided by acid trips and dreams of flying — need only plunge into the churning waves of “Symphonie Fantastique,” the puppeteer deluxe Basil Twist’s reimagining of Berlioz’s 1830 musical masterpiece as a water ballet. Accompanied by a single virtuosic pianist, Christopher O’Riley, its performers — who float, twirl, unfurl and swirl in a 1,000-gallon tank of water — are nothing more than pieces of cloth and plastic…Mr. O’Riley and his piano are visible in the shadows beneath the velvet-curtained tank. Between movements, he can be seen in a state of brooding contemplation — cracking his knuckles, rubbing his forehead, burying his face in his hands.

It’s as if he fears all that ravishing, whispering, thundering music has somehow run away from him and taken on a life of its own. It has, of course.

Mr. Twist’s ballet is a reminder that what we call ineffable art may be a product of meticulous planning and execution. But it also cuts loose from its carefully arranged moorings to visit places that even its creators didn’t know existed.”

As the only performer visible on stage, we must add Actor to Mr. O’Riley’s resume. A feature film, directed by Basil Twist with Mr. O’Riley consulting, will premiere at the International Puppetry Festival in Charleville, France in late September of this year.

Mr. O’Riley is an omnivorous and obsessive reader, and his friendships with writers have engendered his most prominent compositional projects. He write incidental music for the CD accompanying Kris Saknussemm’s evangelist road novel, Reverend America. He wrote music for the film adaptation of Saknussemm’s play, The Humble Assessment. O’Riley’s grandest compositional project resulted in over two hours of music embedded in the eBook version of Mark Z. Danielewski’s prose/poem, graphic and historic and romantic Odyssey, Only Revolutions (Pantheon). He recently contributed music to the podcast series, Foreward.