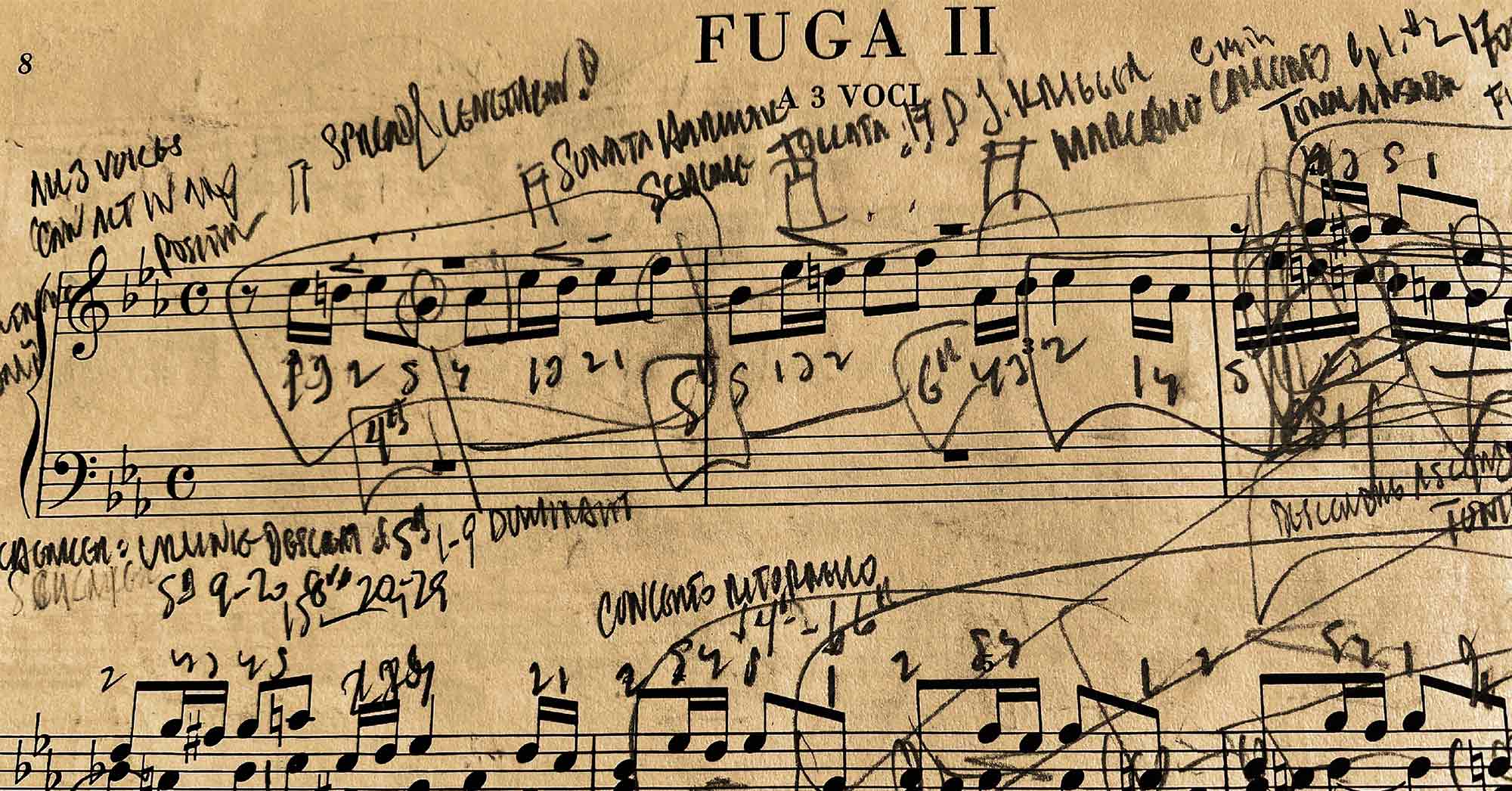 The c minor Fugue, Book I again presents us with a laboratory, a crucible of experimentation & exploration, variation of the simplest rhythmic motive, the thrice-repeated pair of upbeat 16th notes eventually resulting in the final element, the 4th & final paired 16ths landing & originating on a strong beat. It’s an invitation to very those motivic 16th upbeats so they begin as snaps, flourishes, their atomic magnet pull making them begin very compressed, gradually putting a molecule’s space between the 16ths in each repetition, eventuating the final strong beat 16th as more separate, more fatefully authoritative, emphatically un-compressed, fist-shaking 16ths in contrast to a more fluid, inciting, shaken 16ths of the opening affecting. This subtle, subliminal, purposefully gradual re-treatment of the 16th note motive creates another parameter, another range of notational possibility affecting palpably the trajectory of the phrase. Eloquent, venerable character a consequence of gradient compression growing into more primal & punctuating emphasis..

The temptation to relish concordant doubling in fugal stretti, gemütlichkeit, warm & Liebeslieder-like though the cavorting, cascading tandem sixths & thirds may be is a tease we should not cater to or assuage. Dynamic contrast preferring high or low duet voice is possible, but the road to clarity & interdependence of contrapuntal lines is paved with durational differentiation. We can choose to make the upper, apparently twinned voice more lyrical by giving the upper voice more length & duration, while the lower voice is contrastingly shorter. The opposite is possible & encouraged, varied & mirrored by subsequent stretti stacking, the now longer, langourous lower voice juxtaposed with a slightly contrasting, more active & bristling articulative profile. Slightly lengthening the melody note amidst a generally choral texture obviates the need to sing out one particular voice over another; it can simply be a matter of Last Voice Still Sounding as default most prominent.

In fugue subjects of a more liturgical bent, with note values a stately & statuesque procession of half-and-whole notes, we can use varied & relative space & distance between thematic notes based on their intervalic potential & projection: more fluid & compressed with close motivic intervals, more spacious, expansive intervalic leaps suggesting a more expansive, reaching space between notes.In these cases, certainly in the inception, the solo statement of the theme, there is no predetermined pulse or tempo: our progress through time dictated not by pulse but by contour & content.

As pianists, playing on our own, the progress of time & tempo is not unshakably metronomic; we are ourselves the creators of the fabric & fabrication of tempo & time. We must play, tailor the texture of time, not letting the tempo play us.