Just finished reading THE TERROR, 2007 novel by American author Dan Simmons, a fictionalized account of Captain Sir John Franklin’s lost expedition of HMS Erebus and HMS Terror to the Arctic to force the Northwest Passage in 1845–1848. Franklin and his crew are plagued by starvation and scurvy and forced to contend with mutiny and cannibalism, they are stalked across the bleak Arctic landscape by a monster.

The characters featured in The Terror are almost all actual members of Franklin’s crew, whose unexplained disappearance has warranted a great deal of speculation. The main characters in the novel include Sir John Franklin, commander of the expedition and captain of Erebus, Captain Francis Crozier, captain of Terror, Dr Harry D.S Goodsir, and Captain James Fitzjames.[3]

In the final chapters of the book, Simmons explores and uses various aspects of Eskimo mythology to explain the existence of the monster (called the Tuunbaq) as a mythological
creature made flesh, as well as its reasons for stalking and preying on the men of the Franklin Expedition. [from Wikipedia]

it begins as a horrific historically speculative novel, has elements of the best horror novel written, welcomes elements of internal/external journeys a la HEART OF DARKNESS with epiphanies and evolutions worthy of CHILDHOOD’S END. 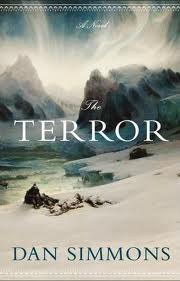