Just finished reading Haruki Murakami‘s masterpiece, The Wind-Up Bird Chronicle, a book I’d initially not warmed to (I bet I know why, now: back in my David Foster Wallace-immersive days, Murakami’s name came up with the same reverence and regularity. That it didn’t read like DFW to me was, i guess, anathema to me at the time, maybe in matters of tone?), but can now name as one of my favorite books ever.

Our Age’s most musically astute writer (although I’d name our faves Kris Saknussemm and Mark Z. Danielewski as similarly musically inspired) has crafted, in a style specific to this work of forces Dickensian and Godard-like, in terms of narrative dynamic (and why hasn’t this been made into a movie?), a yin-yang of the basest, most cruel alienation, manipulation, defilement and unpersonhood balanced, as needs be with an equally inhuman (super-human, on the positive side) capabilities, mythic powers (Persephone) or connection, intuition, intimacy. secrets separate and bind us.

An exquisitely beautiful and epic novel.

I’ve done a few Murakamis now, at a stretch (Kafka On The Shore, Norwegian Wood, and now Wind-Up Bird) and have put in supplies for the forseeable future (all his published works), but will leaven the proceedings now with the latest-published gumshoe (not a genre he’s known for, but why go with expectations, ever, with this artist) novel by a writer I’ve kept up with, however seemingly futile, given his munificent output, for everything that’s seen print, Stephen Graham Jones‘s Not For Nothing.
And speaking of cinematic: even 10pp in, this is clearly SGJ’s most cinemaphilic works. I could see this as Robert Rodriguez’a Magnum Opus.
just my opinion. 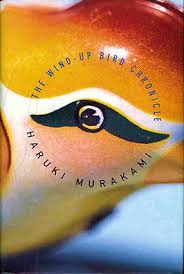