Had a wonderful Labor Day weekend in the Catskills performing with Tango master pianist, composer and arranger, Pablo Ziegler, at the gracious invitation of the Catskills Mountain Foundation. Pablo has been an idol of mine for decades, ever since I first heard him as long-time pianist of Astor Piazzolla‘s New Tango Quintet. Back then, if you asked me my favorite 5 piano recordings of all time, they were Glenn Gould’s Goldbergs (or does that count as 2? Old and new?), Sergei Rachmaninoff playing Schumann: Carnaval, Sviatoslav Richter’s recording of Prokofiev: Sonata #8 and Pablo Ziegler’s performance of Piazzolla’s composed cadenza/intro to Adios Nonino.

I had the great honor of touring Pablo’s two-piano arrangements of Piazzolla’s music in the wake of his Sony release, Los Tangueros (1997) with Emanuel Ax. Manny was busy enough doing all the great things he does, so touring with Pablo was my privilege. We’ve played occasionally over the years, but not for at least the last 6. Pablo has composed and arranged a lot in the intervening time, for his collaborations in chamber ensemble, with orchestras worldwide, so when we connected last year at a piano conference in California, we were very keen on playing together again. The program on Sunday evening now had a lion’s share of Pablo’s work, with occasional Piazzolla treasures., like the one we opened with, Astor Piazzolla’s Heiligenstadt Moment, Michelangelo ’70, named for the Tango club in Buenos Aires, and the ill-received ‘1970 performance Piazzolla gave there, which spurred him to relocate to Europe. I particularly like the addition of an improvised intro by Pablo:

In making the program, we structured in a couple of spots apiece for solo performance. Pablo performed his Milonga en el Viento (also recorded with Orpheus):

More tracks as they come available.

Special thanks to Steven Greenstein, who made the very best of the Yamaha 7’ers on the Doctorow Center Stage, and whose piano collection next door to the hall, was a revelation: more than enough instruments to return for various performances of various repertoire (Matt Haimovitz and I have recorded all the Beethoven Works on an 1823 Broadwood and his gut-strung Gofriller for release early in 2015; this would be a great place to perform them), a COUPLE of Broadwoods plus a Broadwood upright, and apparently more on the way, Liberace’s Baldwin SD-10 (one of their best ever), an Erard Concert Grand with extraordinary fundamentals and sustained resonance (would’ve been interesting to pair those two for this concert), Bechstein, Stein, Mason & Hamlin (I practiced Bach e minor Partita all afternoon on that one; gorgeous) and many more square grands of historical and design prominence.

Thanks also to Brian C. Peters for recording the concert so beautifully, to Pam Weisberg and Victoria Thompson of the Catskill Mountain Foundation for their so graciously hosting us and for their enthusiasm and effort in getting the word out (we were near capacity), and to the warm and generous audience of the Doctorow Center. 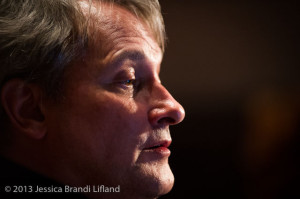