I’ve lost a couple hard drives in the past two years, so sometimes the only existent file for some of my arrangements are PDFs on my iPad, One More Time most mysteriously among them.
I remember working on it back when I lived in Sagamore Hills outside of Cleveland, 7 or 8 years ago. I never performed it, but I wasn’t even quite sure, reading through it curiously, whether the file was just some first draft. Turns out I’d done some serious work on it; some really fine note choices.
What makes the song so challenging & invigorating is its unique and essential Chaconne/Passacaglia format: an F# Major-d# minor 4 bar pattern serves as underlining for the opening and closing vamps as well as the verse itself. I’m guessing one reason I’d not assayed it in performance was my decision to make every iteration of that F#-d# pattern a new voicing, a new variation within the Chaconne/Passacaglia frame; 20 variations in four voices, counting the instrumental refrain only once in deference to its return as coda.
Yes, it takes me nearly twice as long to traverse the song as does Robt Smith & Co. At a certain point, I’ve begun to enlist the expanded sense of sonority, pulse, rubato & expansion of tempo which defines performance, particularly of the Romantic piano repertoire, such that I find myself more concerned with projecting the line, the dramatic breadth, the inherent harmonic colouring of pulse & sonority, the F# Major being lighter, more bittersweet in this most perfect of breakup songs, and what I came to feel needed to be another tempo and weight entirely for the dark d# minor sonority. Every four measures was a reimagining, never a repetition.
Those 20 variations often have recognizable reprises of patterns, and so another realm of imagination is how much to highlight the variants versus the familiar; how much of the supporting texture is contrapuntal versus merely & preferably ambient.
Too, the more slow practice I do, the more I appreciate how stark foreground/background choices can favourably affect the lyric flight.
When i was choosing final takes of my first Sony Radiohead arrangements record, True Love Waits–Christopher O’Riley Plays Radiohead, I always gravitated to those takes that served the melodic arc; it was when I was least concerned with The Beat that the pieces soared. The more freedom & expansion I can allow, the better the song sings.
I’m learning all the time.
Cheers.

Such a shame I went with a hands-only shot; my hair was definitely There for this.

and Iman, unprecedented, was rubbing against my legs & purring loudly; not begging for food of to be let out. Who knew she’s a Cure fan? She was actually Under The Piano Bench the whole time I was working on the piece. I think she loved the Weight, as she often does. Purring away the whole time. 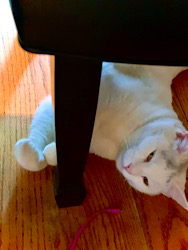 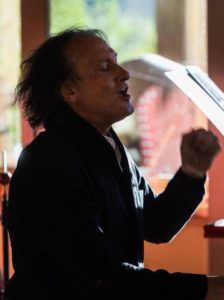 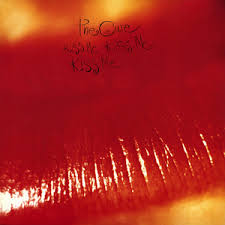