Wrapped Episode #296 of From the Top on Friday night under the aegis of the Jack Kent Cooke Foundation and Washington Performing Arts at George Washington University’s Lisner Auditorium. FTT’s relationship with the Cooke Foundation has now been a 10-year partnership, and through their generosity and enthusiasm (Stuart Haney from Cooke has long been a beaming and benevolent presence at so many of our events over the years; we had a nice reception with the Jack Kent Cooke Foundation before the program in celebration of their own 15 years. Their new executive director Harold O. Levy (formerly schools chancellor for NYC) and Stuart spoke eloquently and passionately of their proud sponsorship of our kids: over the past 10 years, FTT has given out over $2 million in scholarships.

All the kids on this show were recipients of Jack Kent Cooke scholarships: Oscar Paz-Suaznabar, a precocious 8-year old (!) played a charmingly infectious Haydn Sonata movement (the Finale of No. 52 in G), Taiga Ultan, a flutist presently at Interlochen, played (first time on our program) Philippe Gaubert’s Fantasie, Kiarra Saito-Beckman, a violinist from Bend, OR started things off with a bang, playing Waxman’s Carmen Fantasie, and the show ended with the truly incredible Children of the Gospel Choir, with their electrifyingly charismatic director, Michele Fowlin, one of the many groups WPA sponsors. Accompanying them on this occasion was yet another JKCF scholarship recipient, born and bred in SE DC, pianist Clifton Williams, who tore it up when he first appeared on our show, playing Prokofiev. He also joined us for a soiree the night before our latest show, at the home of Thomas and Ann Friedman (!!!), playing great Gershwin, and then throwing down on the gospel piece ofr this date. Even their warmups were epiphanies. They brought the house down.

Our Jack Kent Cooke alum on the program was percussionist, Marcelina Suchocka. She’s been on the show regularly since she was 16, starting out with Chicago’s Percussion Scholarship Group. Now she’s studying with the NY Phil’s Christopher Lamb at the Manhattan School of Music. Back at her first appearance on the show, she’d told me she was a fan of my arrangements work. So it occurred to me as, cycling through the woods and fields of Cuyahoga Valley National Park‘s extensive bike paths, I listened, rapt, to the new release (his first in a dozen years or so) of Aphex Twin, his album, Syro, that there was one piece on the album that could be construed for piano and drum kit. Marcelina was already addressing a full plate of pieces for the show, performing a fantastic solo vibraphone transcription of Gary Burton’s take on Antonio Carlos Jobim’s “No More Blues”, and 2 movements of Paul Lansky‘s “Threads”, with the spectacular percussion quartet she’s formed with friends at MSM: Excelsis Percussion is a truly international quartet, comprised of Marcelina, born in Poland, Aya Kaminaguchi (Japan), Clara Warnaar (Canada-United States), and Mariana Ramirez (Mexico). They were truly riveting in their performance of the Lansky, so much so that they had to play a third movement as an encore for the D.C. crowd, an unprecedented occurrence on our show.

So I got to play with the whole quartet, Marcelina having painstakingly recreated the drum kit part, and the rest of the group pitching in on the extensive hand-clapping tracks. Friends afterward said this must qualify as the fastest turn-around for a cover, ever (Syro came out a little over a month ago). John Servies, our house-sound man did his usual magic getting all of us to fill out the hall in good balance, and our superb head engineer, Berred Ouelette, did a great job of mixing and mic placement for the performance. 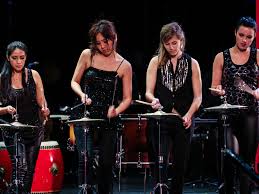 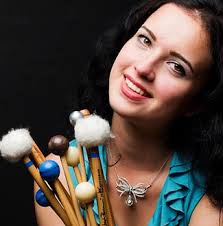