just finished reading the shortest of the great 20th Century novels: A TOMB FOR BORIS DAVIDOVICH by the Yugoslav, Danilo Kis. William T. Vollmann’s essay of this novel as perhaps the single most formative and inspiring to his own work appeared in the volume i recently read, EXPELLED FROM EDEN: A WILLIAM T. VOLLMANN READER, and which is included in the edition pictured here as an Afterward, bookending with the celebrated Introduction by Joseph Brodsky.
published originally in 1976, it’s a collection of characters all of whom, from the 14th Century to mostly the present, have dire collisions with ideology with enough darkly satiric chords to have reaped angry criticism in its time of inception, couched instead of being ideologically unsound but rather plagiarized from a ream of contemporary writers including Solzhenitzyn, Borges, Koestler. there are indeed a sheaf of styles represented in each of the character studies/post-mortae, but what struck my first and foremost was recognizing what was not only Vollmann’s font of inspiration found in Kis, with his nested narratives, lateral anecdotes, history and literature interwoven, but what must also have been the stylistic predecessor to Roberto Bolano as well; biography as a literary curriculum vitae, as in Bolano’s NAZI LITERATURE IN THE AMERICAS.
essential reading. 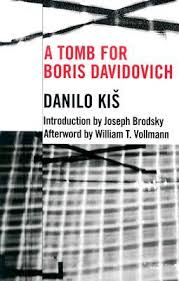