I’ve come to know that it’s valuable to reconsider books you may have earlier dismissed: having heard Haruki Murakami’s name bandied about in the bouquet of my most admired writers: David Foster Wallace, Thomas Pynchon, William T. Vollmann, to name a few, I years ago picked up The Wind-Up Bird Chronicle only to put it down frustratedly after only a few dozen pages. It was only years later, on the recommendation of a valued friend, that I gave him another shot, and proceeded to devour his entire ouevre. I guess, at the time, I was not willing or able to entertain his tone, style, voice, whatever, and had only recently allowed him to resonate, and resonate he did.

Getting to know someone recently who was aware of my wide-ranging tastes in literature, we traded favorites back and forth, and I singled out the one book I’d been completely incapable of finishing, so inept it was in every respect: Memoirs of a Geisha. Turned out it was their most favorite and formative coming-of-age book.  I resolved to assay it one more time, at the very least to try and discern how it could act as a catalyst of characterization.

The rampant success of Memoirs of a Geisha continues to be a fathomless conundrum to my publishing friends. The prose is never more than desultory, its supposed expert recounting of geisha traditions and accoutrements no more descriptive or evocative than a Wikipedia entry. And the main character is a reed in the wind, acted upon, never acting, never empowered.

It’s really just the ethos of the geisha, then, that must hold whatever sway it may have over a young reader, and though Arthur Golden never really illuminates this in any of his writing, the geisha aesthetic could be an attractive model for emulation: cultivating all manner of art and artifice in creating the ultimate alluring adored; a woman seeking to be widely and deeply admired by as many as possible while remaining completely aloof, that distance being cultivated artfully through abstemious rationing of truth; flirtation and seduction being matters of artifice and ceremony instead of being inspired by passion, passing through warm interactions as if trying on a new robe, or role, and then moving on; making a man feel he’s the center of your universe a matter of Art rather than the Heart.

A great and powerful symbol and methodology on which to base one’s character, I suppose, but a really shitty book. 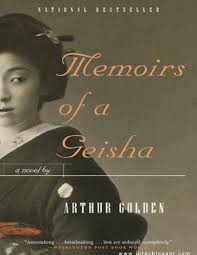