Cloud Atlas was the most highly and often-recommended book of 2004. It was a ricercare of characters far-flung across time, space and sensibility, all connected inevitably and with impassioned, inspired prose. Awe-struck, I since then have read all of David Mitchell‘s work except for a recent volume inspired by the author’s autistic son. Ghostwritten (1999), number9dream (2001), and Black Swan Green (2006) were all astonishing and worthwhile. The Thousand Autumns of Jacob de Zoet (2010) assayed a similar scope to Cloud Atlas, but somehow missed the mark, albeit with his always captivating poetry and positivism.

The Bone Clocks is my 3rd Least Favorite Book Ever. Strike that, the book I hated almost as much as Stephen King’s It, Memoirs of a Geisha, I tossed in the garbage before I finished it.

This Bone-Headed Cockup begins promisingly enough with a first person narrative of a troubled teen in the 80’s Exurban England, but already the boyfriend’s betrayal, the inevitable runaway, the supposed surprise pregnancy, all smack of the type of heavy-handed telegraphing that could only be the result of Mitchell’s dealing with Hollywood focus groups (Cloud Atlas was made into a fairly fine Wachowski Bros. film) and drinking the LaLaLand Kool-Aid of his new-found self-importance. We then meet a Cambridge Lothario (guess what? he has a one-night stand with our previously introduced heroine! Kismet!), a failing writer (didn’t have to look to far afield for that one, eh?) who again serendipitously comes to know our pal, Holly Sykes, Holly’s apparently autistic brother Jacko (or is he?), and various shadowy characters who eventually (about tow-thirds in to this ungainly 600+ pages) are revealed as warring factions of psychic vampires. Guess what? The Bad Ones are Carnivores, the Good Ones, not.

The action sequences, such as they are, supposedly with Everything We Hold Dear held in the desultorily narrated balance, would not pass muster in a mid-level YA novel. A 50-page section at the end, telling of the post-Immortals war Mad Max-like apocalypse, can only be called sympathetic as fictionalization of Naomi Klein’s climate-change epic, This Changes Everything (more on that in another post).

To the dustbin with this. I’m not even going to make the extra reach for the recycling bin. 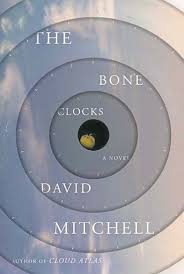 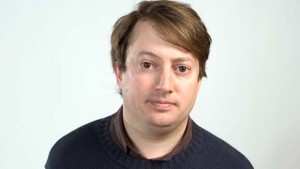