Yesterday afternoon found us returning to NEC’s Jordan Hall in Boston for this season’s first live taping of From the Top. Extraordinary performances of really great music by all our young guests:  the opening movement of Schumann’s turbulent a minor Violin Sonata played with fervor and poetry by 13-year old Masha Lakisova, the Finale of Prokofiev’s Flute Sonata played with authority and massive sound by Elizabeth Sperry,  the final movement of Bartok’s 1st String Quartet characterfully rendered by a group from Philadelphia’s Settlement School, the burnished, honeyed voice of Ray Han’s French Horn for Glazunov’s Reverie, and a spectacular performance of Debussy’s piano prelude, Feux d’artifice by Taiwanese wunderkind Yun Chih Hsu. The audience demanded an encore from Yun Chih, and she obliged, blazingly, in a movement of Bartok’s Out of Doors Suite, The Chase. This particular show will be up on the satellite and broadcast on our member stations starting November 3.

What you won’t hear on the broadcast is the breakpiece I play at the midpoint of each of our programs. For this show, I played a fast milonga by the Argentinian Tango master composer, Pablo Ziegler, La Rayuela (“Hopscotch”), mp3 below. 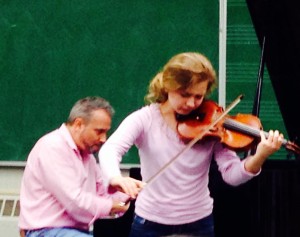 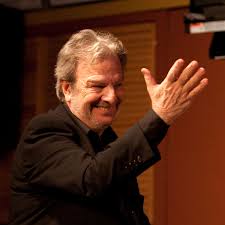