I’m proud to have read the complete works of William T. Vollmann. Actually, that’s not quite true: his 7-volume treatise on oppression, the canvas of which is world-and-history wide, Rising Up and Rising Down: Some Thoughts on Violence, Freedom and Urgent Means (2003) I only read in its 700+ page distilled version, although I do count proudly the full set in my library. His fiction works the dark side of the tracks: San Francisco’s Tenderloin District of junkies and whores in many volumes of novels and short stories; I count The Rainbow Stories (1989) as my favorite of them, but they are each indispensable and seemingly documentary or journalistic in their scope and passionately poetic detail: Whores For Gloria (1991), 13 Stories and 13 Epitaphs (1991), You Bright and Risen Angels (1987), Butterfly Stories; A Novel (1993), The Atlas (1996), The Royal Family (2000); Europe Central (winner of the National Book Award in 2005) is multi-narrator straddling of World War II, counting among its protagonists a Leopold Bloom-like paranoid inner monologue by none other than Dmitri Shostakovich in an affair with the translator-wife of documentary film-maker Roland Karmen, and a German soldier whose responsibility to deliver Zyklon B to the death camps he deals with by artfully burying the cylinders til their freshness date has passed. His Seven Dreams: A Book of North American Landscapes, has only seen 4 of its projected set published, spanning history and pre-history of the colonial and exploratory taming of the Great White North: The Ice-Shirt (Volume One, 1990), Fathers and Crows comprised of intrigues political and religious (Volume Two, 1992), The Rifles (Volume Six, 1994), Argall: The True Story of Pocahontas and Captain John Smith (Volume Three, 2001).

His non-fiction runs the gamut between his concerns of oppression and rebellion, as in his exhaustive (and exhausting) history of the Imperial Valley in California, the migrant workers who continue to toil in subsistence conditions, the corporate rape and abuse of its people and environment, Imperial (2009);  abetted by his James Agee-style photo-journalism as in Poor People (2007); to themes of identity and sexuality delved into with relish as in his fiction, from the transvestite-tinged study, The Book of Dolores (2013); and collating that interest into his Kissing the Mask: Beauty, Understatement and Femininity in Noh Theater (2009).

Now comes his Last Stories and Other Stories (2014), a book so titled, as he claims in his introduction, because any further publication with his name attached will have been written by a ghost. Appropriately enough, the collection is one of ghosts, the undead, the legendary and doomed loves of history, necrophilia (in graphic and one must say, romantic and lapidary prose), vampires and werewolves. One might almost read this as Vollmann’s piggy-backing on the Twilight series and their ilk, just on a level only reached for by the most exalted pens of our or any time. Whether in Japan, Mexico, and Balkans, Vollmann creates a sense of journalistic integrity, even when he is making alt-history of long past out of whole cloth. In his recounting of war zone stories, one could swear he was quoting from diaries.

He remains our most troubled and troubling, yet astonishingly beautiful and transcendent writers.

One can only hope, based on the projected volumes named in Wikipedia, that his introduction was an invocation of the ghosts of his retellings, and not a farewell. 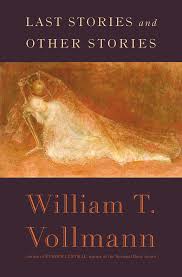